Last night, I went grocery shopping (I don’t normally go on Fridays.) I know what you’re thinking: I walk on the wild side, I really know how to live …and, uh, so forth. And, I was excited. Possibly a little nervous. I was stepping outside the box and doing a radical thing. I brought my brand new produce bags.

I had never seen anyone do this in real life. I didn’t know how the cashier was going to handle them, but I did know that my little act of rebellion could have a large impact. For one thing, apparently Friday night at the grocery store is hopping (that’s what the kids say for “crowded”). And I got glances. Nothing negative, just people noticing something they probably had never seen. Maybe, I’ve  inspired someone to change their behavior or learn about zero waste online. At the least, I did my part to normalize the practice.

I also made package-free produce choices, decisions that were spurred on by the presence of the produce bags.

And then the cashier had to notice them, handle them, and see that they didn’t seem to make the job harder. Kudos to the guy for not raising an ounce of fuss!

When I brought them home, the usual mountain of non-recyclable plastic that appears weekly in my garage bin didn’t happen.

And finally, by telling you guys about my adventure, I might inspire you to get your own.

See? That’s a lot of impact for such small things. And I’m adopting this zero waste behavior going forward. 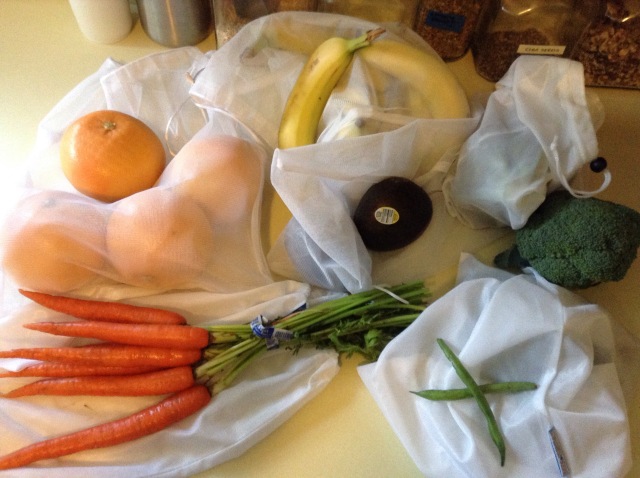 Buying from the produce section at the grocery store isn’t completely waste-free. For one thing, there are ties and stickers and some produce options don’t come to my store without their own bag. But the seasons are shifting and soon I will have food from my garden and farmer’s market.

10 bags seemed like a lot when I was buying them but I used every one. I think it was a good number, though. I felt like I got everything I wanted. The more see-through mesh seemed easier on the cashier though I liked the black closures.

I’m not into drying my own food stuffs. Bulk dried produce is an area where I will need to figure out a system.

I usually buy about 4 plastic bags of frozen produce on an average shopping trip, but I am pretty stocked up. I will be paying more attention to “putting up” (mostly freezing and canning) food this year, but I still have a lot to learn.

Anyway, this is a process and I’m happy with my new habit.

I still use these same bags when going shopping.

It is helpful to send them through the wash now and again (but if they’re made from plastic, as mine are, skip the dryer). In Plastic Free: How I Kicked the Plastic Habit and How You Can Too by Beth Terry, the author relates an alarming statistic about grocery bags generally:

“And yet a 2010 study of reusable shopping bags collected from consumers entering grocery stores in three major cities found that all of the bags contained high levels of bacteria…the same study also found that bacteria levels in bags could be reduced 99.9 percent by hand or machine washing.”

The slippery cords of my mesh bags slid out of their sleeve with every wash, even despite preemptive tying, but I used a yarn needle to work it back through with a minimum of fuss. The ones that I bought with the black plastic closures held together better, but they were harder for the cashiers to see through.

Speaking of cashiers. I did occasionally get some resistance. I brushed it off by cheerfully offering the suggestion that they open it up to see if they have trouble. If you go on an off hour when the lines aren’t too frantic (I usually shop Sunday morning while most of my neighbors are at Church), you’ll have a more pleasant time.

You can also think outside of the produce isle for this type of bag, I sometimes use them for collecting bakery bagels and bulk candy too.

Do you have produce bags? How many do you need? How do you avoid produce garbage? If you aren’t using them, was this helpful to hear about?

Until next time, keep that talk walking!